← more from
Beanie Tapes
Get fresh music recommendations delivered to your inbox every Friday.
We've updated our Terms of Use. You can review the changes here. 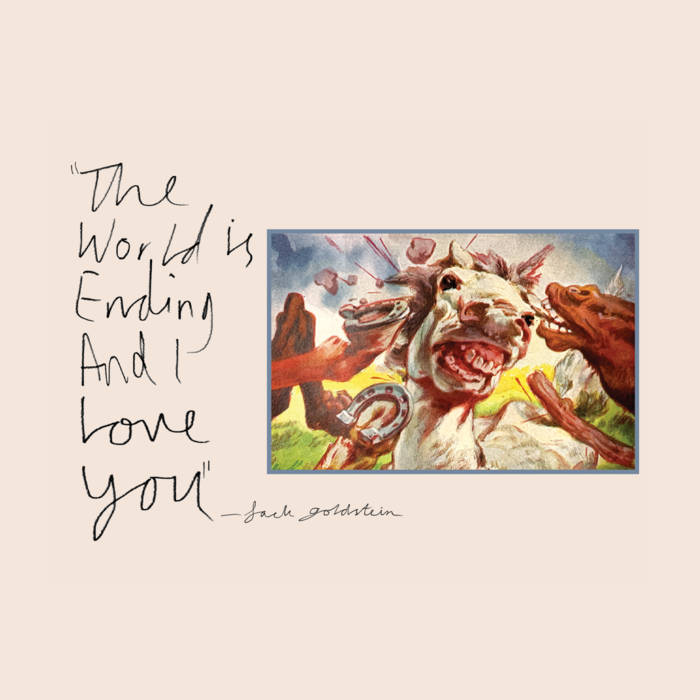 Jack Goldstein has completed his new solo album, a 13-track hyperpop exploration of love, loss, family and hope. Composed in the aftermath of losing both his parents during the lockdown, “the 🌍 is ending and i ❤️ u” is an album that will make you dance, cry and punch the air with joy. It’s an explosive expression of the pent up emotion of lockdown and a positive and progressive endeavour to recapture the cherished emotional vulnerability that the process of grief hardens us all to. It’s also a perfect appetiser for Jack’s live shows, which are intense, joyous and occasionally life-changing experiences.

After a decade of working alone on a series of ambitious and varied albums, Jack wanted to invite friends to contribute to the new album. There are vocals from Aiden Canaday, Blanca Regina, Cameron AG, Charlie Hannah, Clementine Blue, Georgie Hurst, Jimi Tormé, Jonah Falco, Mark Bandola, Max Blansjaar, Max Levy, Wayne Waterson, Zahra Haji Fath Ali Tehrani and a programmed deep-fake Randy Newman, instrumental parts from Ben Walker, Chinor Silver Band, Jack Harris, Jamie Hyatt, Tessa & Harry Goldstein and Xav Clarke. There are also voice messages from Jonah Falco, Jordan Ruble and Kyri Tsappas that feel like private conversations, adding to the feeling that Jack is sharing his inner world with us. The result is an album that feels more communal and emotional, without losing any of the bombast and explosive energy of his earlier work.

Jack has long been infamous on the Oxford music scene, and is now making his mark on Margate. From his teenage days fronting stoner kids Gunnbunny through Fixers, The Dresdens, Dream Division, Jade Hairpins, Jet Ski World and his prolific solo output, Jack has kept Oxford audiences on their toes. Back in 2015, Oxford music mag Nightshift wrote “It doesn’t matter how hard he tries, Jack Goldstein can’t help but write great pop songs. He can run all he likes, but one day fame and glory will find him.” Louder Than War described him as “high octane outlaw pop with a Lynchian sense of the bizarre channeling the spirits of Brian Wilson, Andy Kaufman and Reeves & Mortimer.” This new album feels like the culmination of 20 years of bold experimentation and prolific creativity, and right now everyone needs this message of love, loss, family and hope. It’s time for the world to discover Jack Goldstein.

12. the 🌍 is ending and i ❤️ u
⇒ speech by Jordan Ruble
└ ceremonialdecay.bandcamp.com

Bandcamp Daily  your guide to the world of Bandcamp